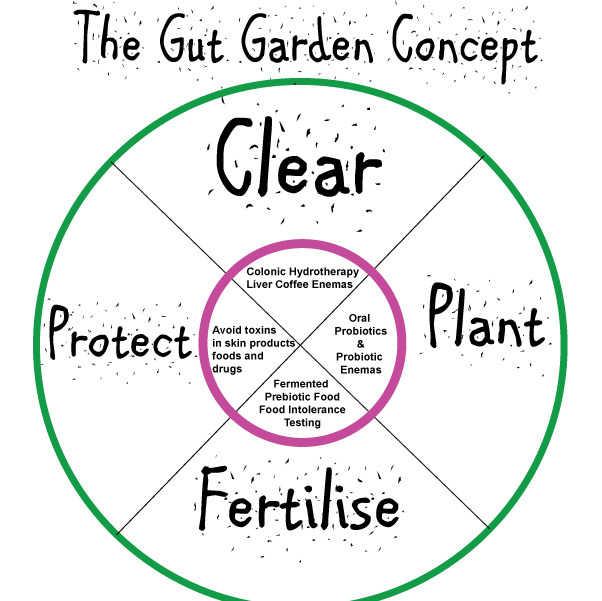 It is now accepted that many skin problems, mood issues, weight problems and illnesses start in the gut and bowel. It is also accepted that everyone in the western world has imbalanced gut flora due to wide spread and incorrect use of anti-biotics. Clear the weeds before planting the seeds. There are four steps to natural functional gut health based on The Gut Garden Concept. The first is to clear your gut garden of imbalanced gut flora like candida and toxins. This is done using the advanced Harley Street Method of colonic hydrotherapy which offers privacy and the assurance of FDA approved med II equipment. Clearing and cleansing the liver and colon with colonic hydrotherapy and liver coffee enemas can boost the metabolism, remove eye bags, reduce bloating, improve skin problems like acne and kick start weight loss due to increased hydration. The second stage is to replant your gut garden with probiotics and to identify food triggers which may be causing skin problems, bloating, mood imbalances and weight gain. According to acclaimed author and physician, Dr. David Perlmutter, the best way to replant gut flora is with probiotic enemas. Taking oral probiotics and having direct gut flora probiotic enemas is recommended. The third step is to maintain and fertilise the gut garden with prebiotic foods such as kimchi and kombucha. These fermented foods feed the good gut flora in your bowel. The fourth stage is to protect the gut garden and the bowel from further imbalancing substances. It is accepted that transdermal absorption can increase by 1000% times during aesthetic skin treatments which is why holistic natural skin products are used to achieve younger more radiant skin at Vitality Centre.

What is Candida? Candida is a gut flora weed that overgrows in the bowel. Candida overgrowths are the number one form of imbalanced gut flora caused by anti-biotic usage and can be removed with colonics.

Your gut (aka bowel, colon, large intestine) is just like a garden. And it works perfectly fine, until the garden is disturbed. So how does the garden in your (aka bowel, colon, large intestine) become disturbed? When you take an "anti-biotic", you are taking a substance that might be compared to weed killer in a real garden. The gardener sprays weed killer on the garden in order to kill one weed. But what happens? The entire garden dies. That's just how it is when you take an anti-biotic. You take the anti-biotic (anti-bacteria), to kill one bacteria, but like weed killer, it does not discriminate, so it kills all. This is how imbalanced gut flora happens. Most people will have taken a anti-biotic, at some time in their life. And if the have not had probiotic implants or an oral course of probiotics, they very likely are suffering from imbalanced gut flora. 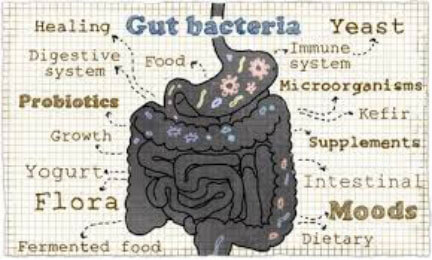 So the entire garden dies. You look out your window one week later and what do you see? You might notice that although all the plants are dead, some very big thistles and weeds are growing up quite comfortably from no-where and taking over. But why? Well, its because those weeds are tough. They did not die like the other plants when they were sprayed with weed killer in the garden. In the bowel (gut), the one that is most resilient is called "Candida" so this natural gut flora will take over the bowel in the absence of the other gut floras that have been killed off by the anti-biotic. Candida has a job too. Its job is to remove heavy metal. So, it its place, its is useful thing. The problem occurs when it takes over. This is when you will notice problems like white tongue in the morning, brain fog, poor digestion and a reduced immune system that leaves you open to other problems.

How To Get Rid Of Candida?

Firstly, we need to change our thinking. We must never "get rid of Candida" completely. Lets consider the garden again. So we had a lovely garden with many plants growing in it. But we saw one bad weed and so we sprayed the entire garden with weed killer. Remember this is equivalent to how it is when we take an anti-biotic. The entire garden relates to the gut flora in our bowel. Now the entire garden is dead but we have another problem. We have thistles and nettles to get rid of because these weeds were strong enough to withstand the weed killer. Its just the same in the (aka bowel, colon, large intestine). But in the case of gut flora, it is Candida, that is the plant that can with stand the anti-biotic. So it grows up and take over the entire gut.

How Do I Know If I have Candida?

If you have Candida, you may have a white tongue in the morning. Remember, Candida does not grow on your tongue. It mainly populates in the gut (aka bowel). The reason that you notice it in the morning after a nights sleep, is that you have not been swallowing saliva. But the root of this Candida is in your bowel. That which you see on you tongue is only the tip of the iceberg.

Ask some experts and they will tell you to go ahead and take a course of probiotics. Sadly, its not that simple. Robotics are comparable to the new seeds that your garden needs. Yes, they are one part of the story. But again, lets consider the garden. If we throw a bunch of seeds into the garden that is infested with thistles and nettles, it wont do much good, will it. But have to pull those excess weeds out. So we put on our rubber gloves and we get into the garden and we pull them from the root. We wont get them all, but that's OK. We don't need to. We just want to get the excess so that the other plant sees (probiotic) has a chance to grow too.

In the (aka bowel, colon, large intestine), we use colonics to remove excess Candida. This is equivalent to pulling the excess weeds from your garden before you plant the new seeds. And its pretty incredible to see that white fluffy matter floating away in big bunches (especially considering that some people still believe it does not exist).